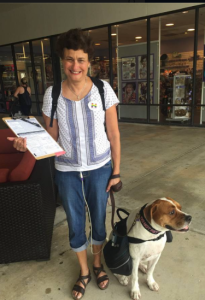 It’s Friday night and Lynn Wolfson is slicing up strawberries for a traditional Sabbath dinner at her home in Fort Lauderdale, Florida.  She says the berries are “big, fat and beautiful” but nonetheless she will not eat them.  Wolfson, who was born with Hirschsprung’s disease, is on the short bowel syndrome diet.  Or as Wolfson likes to call it, “chicken, fish and mush.”

According to Dr. Paul Hyman, a pediatric gastroenterologist and director of the gastroenterology department at Children’s Hospital in New Orleans, Hirschsprung’s disease is a genetic disorder which occurs once in about 6,000 births.

Dr. Hyman says within the first week of gestation, nerve cell bodies fail to develop and migrate from the spinal cord to the colon.  The result is that it is difficult or impossible for a patient to have a bowel movement.

Hirschsprung patients are also at high risk for enterocolitis—an inflammation of the intestines.  Left untreated, enterocolitis has a high mortality rate.

Surgery is the standard treatment for Hirschsprung’s disease.  The portion of the intestine lacking nerve cells is removed and the healthy part of the intestine is then reconnected to the anus.  Children can go on to live healthy and normal lives, although most patients will continue to have problems with constipation or incontinence.

Wolfson, who is now in her fifties, says as a child, she was emaciated and in constant pain from severe constipation.  Doctors told Wolfson’s parents it was a psychological disorder and she just needed discipline.  Lynn says one doctor even said she was “trying to control her parents by holding her feces.”

Wolfson’s childhood memories are of doctors and uncomfortable exams, daily enemas, laxatives and vomiting—once even vomiting her own feces.  After years of misdiagnoses, she finally had the corrective surgery at age seven.  But a short time after, Wolfson’s intestine burst.  She had her first of many colostomies.

While she was recovering, a boy in her second grade class hit her “in the bag.” Wolfson recalls “He punched me and I went up to the teacher and told her I had snakes.” The boy had punched Lynn so hard, her intestines were coming though the stoma or opening and she was rushed to the hospital.

When she was just eight years old, Wolfson’s parents were wiped out.  Her medical bills had reached one million dollars.  They sold their four-bedroom house and moved into a two-bedroom apartment in a lower income neighborhood.

Still, for years after the corrective surgery and into adulthood, Wolfson continued to experience symptoms of Hirschsprung’s.  She vomited so often, her throat was constantly sore.

Doctors told Wolfson she had irritable bowel syndrome, gastroesophageal reflux disease, anorexia, and psychological problems.  When she told them about the Hirschsprung’s diagnosis as a child, doctor after doctor told her to let it go.  It’s a childhood illness, they would tell her, and you had corrective surgery.  Forget about it.

Don’t Come Back Until You Know

In spite of her near constant pain and discomfort, Wolfson’s life was full.  She got married, had two daughters and taught math.  Wolfson laughs recalling her routine at the school. “The janitor used to follow me wherever I went because I was vomiting all the time.”

Her colleagues at the school may very well have saved Wolfson’s life.  One day at lunch, a teacher who was also trained as a nurse asked Wolfson when she was going to share the news about the baby.  Wolfson’s belly had grown so large—from backed up waste—she appeared to be six months pregnant.  The nurse told her to go to the doctor right away—not even to teach her afternoon classes.

Wolfson had test after test, including a particularly uncomfortable procedure called a defecogram in which doctors take x-rays of a patient defecating.  Wolfson somehow found humor in all of it, saying she had always wanted to be a movie star and this was her opportunity.

In 2002, after decades of searching for answers, a physician finally told Wolfson that she had Hirshsprung’s disease—and that 90 percent of her intestine was dead.  Doctors removed her colon, anus and rectum.

Doctors are not sure if Wolfson’s childhood surgery was performed incorrectly or if the disease is progressive.  Hirschprung’s in adults is rare and there isn’t much research into the disorder.  Wolfson, who corresponds with other “HD adults” on the Internet, thinks she may be one of the oldest patients to have the illness in the United States.

She continues to experience symptoms—some unexpected.  A few years ago, she was having lunch with her mother when she could no longer hold her head up.  Her neck had broken from malnutrition.  And she was diagnosed with asthma when blocked feces pushed on her lungs.

In spite of a lifetime of pain, unpleasant medical procedures and surgeries—Wolfson estimates she has had 25 operations with more to come—she continues to remain upbeat and active, even traveling to Australia last year.

Still, Wolfson admits she’s wanted to give up a few times and she absolutely misses eating—she is now limited to just a few plain foods and relies on protein drinks for nutrition.  But she tries to focus on all the good in her life.  Wolfson continues to tutor students in math and says many of her students are thriving. She is active in the community and with her husband, Eli, was honored with a prestigious award this summer for supporting Jewish education.

But it’s Wolfson’s daughters, now in their twenties, which give her the most joy amid the painful days.  Wolfson says she gets to brag a little extra given the terrible things on the other side of her life.  Inspired by their mother’s struggle, both of Wolfson’s daughters are pursuing careers in medicine, hoping one day to find a cure for their mother’s childhood-turned-lifetime illness.

P.S. Since this piece was published, Wolfson has acquired a service dog, Zev.  He’s pretty adorable, but he also is a huge help.  Wolfson can lean him on when she feels unsteady; Zev can carry Lynn’s medicine and various medical devices; and he can pick up things off the floor since bending can cause pain.  He is also being trained to do many other helpful and lifesaving tasks. 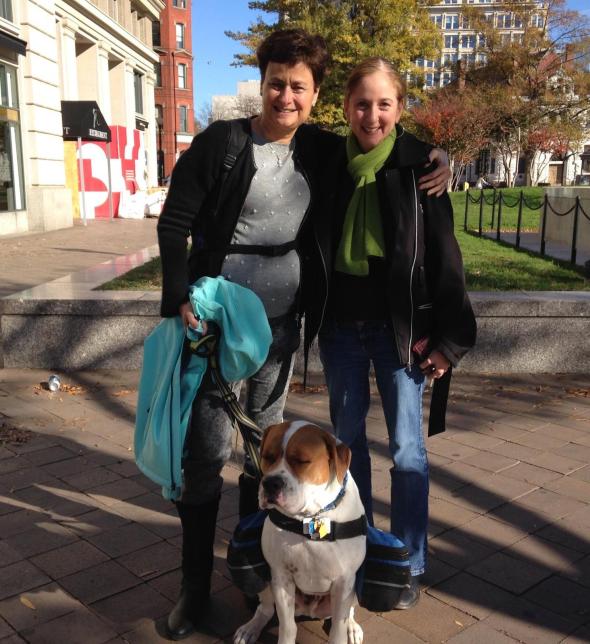