Making a speech or presentation isn’t easy and both men and women get the butterflies.  But after centuries of being silenced, women face some unique challenges on the platform.  With Elizabeth Natalle, I wrote this book to provide women with the skills to speak with confidence and grace. Here’s an excerpt from: 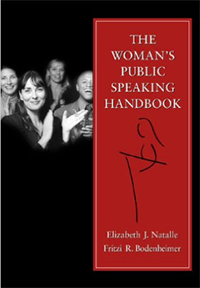 Shortly after the terrorist attacks on September 11, 2001, a woman called into a radio talk show complaining about the lack of women’s voices in the debate over how the United States should respond. The caller was right. According to a Freedom Forum report entitled Who Speaks for America? Sex, Age and Race on the Network News, 87 percent of expert sound bites are provided by men. And if you read your local newspaper, many of the opinion columns are likely to be written by men. What this means is that women’s voices are being left out of important conversations about our neighborhoods and our nation. Free speech is a critical component of democracy. When the stock market falls, unemployment rises, or terrorists attack, we don’t take to the streets looting and rioting. In our country, we discuss and debate. Public speaking can give women a voice in these important deliberations.

Finding your voice may have some added benefits as well. A few years ago, after delivering a one-minute presentation to a professional networking group, Women of Washington, a striking and poised woman approached me and said, “I enjoyed your presentation and would love to get to know you.” Today that woman is one is one of my best friends. If a one-minute speech can offer as great a reward as a lifelong friend, we must let our voices be heard.